In July 2018 The Bahamas government passed the Multinational Entities Financial Reporting Act, 2018 (the “MNE Act”), which is deemed to have come into force on 1 January, 2018 and requires certain companies incorporated or resident in The Bahamas with revenues of at least US$850 million to annually file a country-by-country report with the Minister of Finance. 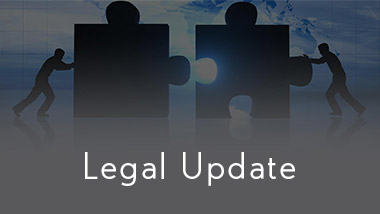 The Register of Beneficial Ownership Act (the “Act”) came into force on the 20 December, 2018. The Act provides for the Competent Authority to establish a secure system to enable each Registered Agent to maintain a database of required particulars on the beneficial owner(s) of a legal entity for which it has responsibility.

The Commercial Entities (Substance Requirements) Act, 2018 (the “Act”) came into force on 31 December, 2018, to ensure compliance with international standards on tax governance and transparency.

Chambers and Partners is a world renowned legal directory and ranks
the most outstanding law firms and lawyers in over 180 jurisdictions
throughout the world.

McKinney, Bancroft & Hughes is proud to have Chambers and
Partners rank four of our Attorneys, three of whom were also ranked by
IFLR1000. In addition to the ranking of our Attorneys, Chambers and Partners
highlighted our Firm’s wide acclaim in relation to our litigation, corporate
and finance capabilities. 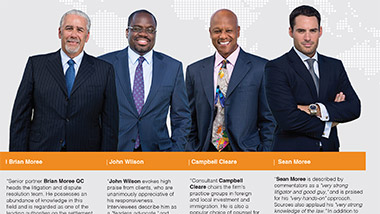 McKinney Bancroft & Hughes has again been ranked as a Tier 1 Law Firm by IFLR1000, and was highlighted for its banking, M&A and investment funds expertise. 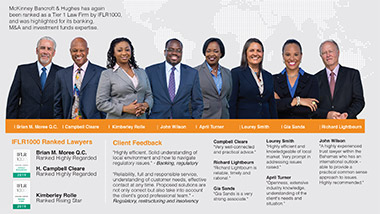 I was honoured to be asked to provide a short tribute to the late Chief Justice the Honourable Stephen Isaacs. I knew him for over 25 years and was deeply saddened by his untimely death. It is one of life’s cruel ironies that only a short time ago we were together at Government House celebrating his elevation to the substantive office of Chief Justice. Now, a mere two weeks or so later we are mourning his passing. It seems unfair but, to the faithful, we are left to remember the profundity of the opening eight verses of chapter 3 of Ecclesiastes and accept the providence of a sovereign God.

To those who are anchored in the past, judges are seen as stern, intimidating, aloof, formal, detached and pedantic authoritarians dispensing justice from a privileged and elevated perch quite unconnected to the real life experiences of the people who they are constitutionally and morally committed to serve through the court system. Such persons would not have recognized the late Chief Justice The Honourable Stephen Isaacs, for he was not that kind of a judge; indeed he was the antithesis of every component of that outdated and
uninformed caricature.

Those of us who knew him will remember Chief Justice Isaacs as a thoroughly decent, humane, engaging, courteous, thoughtful and genuine man who served his country and his people for over 24 years as a competent, influential and accomplished jurist. He started his judicial career in 1994 as an Assistant Registrar of the Supreme Court and worked his way through the judiciary to become the highest judicial officer in our Commonwealth – The Chief Justice and head of the Judicature, the third branch of Government under the Constitution.

Stephen’s professional journey from a young lawyer at the Bar in private practice to his move to the public service as an Assistant Registrar and his subsequent ascendency through the ranks of the judiciary to become a Justice of the Supreme Court, then a Senior Justice and ultimately the Chief Justice is the quintessential success story for the lawyer. His life and career will serve as an inspiration to Bahamians throughout our country as a real life example of how, notwithstanding the challenges and vicissitudes of life, we can all achieve our aspirations and positively impact those around us and the
development of our nation.

Over 2,400 years ago Socrates gave his well known iconic description of the essential qualities of a good judge. He stated: “Four things belong to a judge: To hear courteously; to answer wisely; to consider soberly; and to decide impartially.” Chief Justice Isaacs demonstrated these qualities in the discharge of his judicial duties. In presiding at court hearings his demeanour was placid, his tone was cordial, his dealings with both counsel and litigant were respectful, his management of his court room was efficient and his control of the proceedings was firm, disciplined and temperate. Above all, he was fair in the sense of being open minded, impartial and independent.

Judicial temperament has been described as reflecting “….patience, open-mindedness, courtesy, tact, courage, punctuality, firmness, understanding, compassion, humility and common sense.” The late Chief Justice Isaacs possessed all these traits as he went about carrying out the functions of his judicial office. At the funeral of Lord Cooke of Thorndon, one of the greatest New Zealand judges, it was said that “he was never flashy, never one to blow his own trumpet. He believed he was part of a great movement……..He believed in practical justice that delivered fair and reasonable outcomes.” I cannot do better than to borrow those words to describe the late Stephen Isaacs.

Chief Justice Isaacs had a commendable grasp of legal principles across a wide cross section of the law. He was grounded by an innate sense of fairness and justice which served him well as a judge. His well-developed understanding of the milieu in which he lived combined with his experience and working knowledge of the law were reflected in very sound judicial decisions.

He adjusted seamlessly to the era of judge driven case management and because of his experience he adroitly managed a large volume of cases through the interlocutory stages to trial or earlier resolution. His record clearly demonstrates that when adjudicating cases he had no judicial timidity and applied the law as he saw it.

I remember on one occasion when I discussed with Justice Isaacs, as he then was, the provocative tease from Lord Denning when he was delivering an after dinner speech in the presence of one of his fellow judges. Lord Denning said – “Unlike my brother judge here, who is concerned with law, I am concerned with justice.” Stephen identified with the point behind Lord Denning’s quip which reflected his innate sense of justice and the need to ensure that the law accomplished its ultimate goal of ‘doing right’ between the parties before the court. We have lost, all too soon, a notable, competent, experienced and respected Bahamian jurist who enhanced the public trust and confidence in our legal system. It has been stated that the Judge is the pillar of our entire judicial system. In that regard, Chief Justice Isaacs was a strong, reliable and steadfast pillar who significantly contributed to the preservation of the administration of justice in The Bahamas and the development of our jurisprudence. Our system is better off for his public service and we who knew Stephen Isaacs can learn from his quiet dignity, his temperate disposition, his passionate commitment to justice, his unfailing fairness, his humanity and his humility in wearing the privilege and power of high judicial office without ever succumbing to pomposity or arrogance.

May he rest in peace. 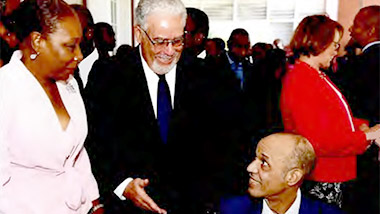 Please see the PDF for our congratulations to Vanessa M. R. Hall on being an Honouree of Professional Services Bahamas 40 under 40. 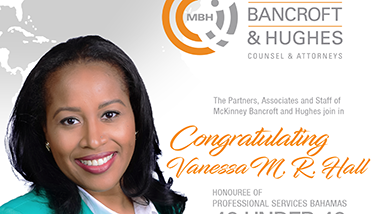 McKinney, Bancroft and Hughes mourns the passing of the Hon. Stephen G. Isaacs, Chief Justice of the Commonwealth of The Bahamas. We wish to extend our heartfelt condolences to the family and friends of the Chief Justice along with the entire legal community.

McKinney, Bancroft and Hughes thanks the Hon. Stephen G. Isaacs, Chief Justice of the Commonwealth of The Bahamas for his years of dedication and service in the legal community and wish to recognize his illustrious career. His legacy will be remembered forever. 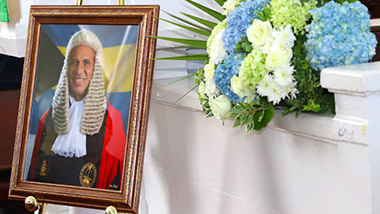 Passing of Chief Justice of the Commonwealth of The Bahamas 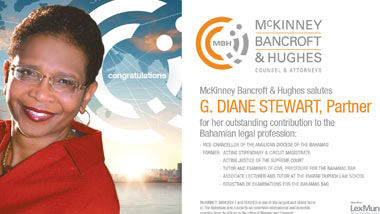 Salute to a Partner
View pdf

Pursuant to the Value Added Tax Act, 2014, which came into force in the Commonwealth of The Bahamas on January 1, 2015, legal fees and disbursements incurred in a matter or transaction are either exempt or subject to a value added tax (VAT) chargeable at a zero percent rate (0%) or at a standard rate. Pursuant to the Value Added Tax (Amendment) Act, 2018, effective July 1, 2018 the standard rate has increased from seven and one half per cent (7.5%) to twelve percent (12%). VAT is added to our invoices for legal fees and disbursements at the applicable rate unless the services and disbursements are exempt. For any queries you may have in this regard, please contact Mr. Adrian Edgecombe, CA at afedgecombe@mckinney.com.bs. 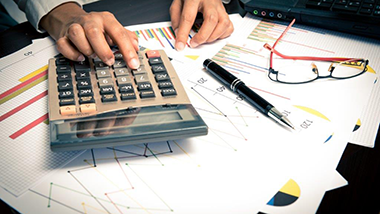